The Flashforge Finder is a 3D printer mainly marketed to people new to the 3D printing world. With a really aggressive low price and focus on ease of use and practicality, the Flashforge Finder can be considered the perfect starter 3D printer. It is also quiet to use, provides good print quality and you can connect it with a USB cable or a Wi-Fi Network. Don’t be discouraged though as this printer has a lot to offer to the advanced user too.

“It has some really great features and technologies, all packed into a clean and compact frame, thus making the whole experience as pleasant as possible for the end user.”

Finder shares some features with its big brother Dreamer while still achieving a relatively low price. This also means that the company had to make some sacrifices to hit that low price point while still delivering a good product to the market. User reviews on various online shops show that it is indeed a good budget 3D printer, but, of course, it’s not as good as some of the best 3D Printers.

In the following sections, we will list the core features of the Flashforge Finder as well as the Pros and Cons. At the very end, you will find the final summary of this 3D printer with an overall rating. 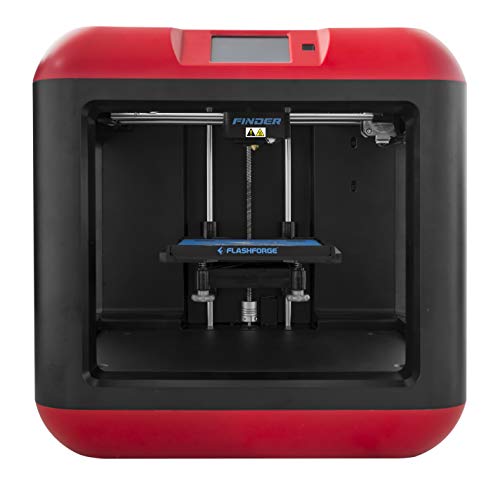 Why Go With the Flashforge Finder? | 3D Printers Online

The Flashforge Finder is the perfect combination of approachability and reliability to be a great classroom performer. Not too big or complicated to overwhelm, but also consistent with no "open source" finicky customizations.

The following are the key specifications of the Flashforge Finder 3D printer.

Pros of the Flashforge Finder

Cons of the Flashforge Finder

While the Flashforge Finder 3D printer is very good for a cheap 3D printer, there are some other 3D printers you might want to have a look at.

This is one of the few 3D printers on the market that offer similar ease of use and pleasant appearance to the Flashforge Finder at a low price. Obviously there will be more compromises.

While this printer might not be as cheap or as pretty as the Flashforge Finder, it does have a Dual Extruder and a bigger build platform at a very competitive price.

How to load and unload change filament?

You can find a thorough step by step guide on how to load and unload change filament in the Finder User Guide.

How can I delete the files on the TF Card?

The Flashforge Finder is a really good starter 3D printer with potential for more advanced users. It packs some really nice features and offers a lot out of the box. Because of its focus on ease of use and simple interface and software, it is the perfect printer to get you started with 3D printing.

Bottom Line: If you want to enjoy a great printing experience with a clean looking, super quiet, and easy-to-use 3D printer that just works, then the Flashforge Finder is definitely a 3D printer you should consider, especially at that price range.

While you might have a few minor problems, the community is active and growing, and most of the problems have been resolved with the contribution of the community, and the printer is only getting better.

Why Go With the Flashforge Finder? | 3D Printers Online

The Flashforge Finder is the perfect combination of approachability and reliability to be a great classroom performer. Not too big or complicated to overwhelm, but also consistent with no "open source" finicky customizations.