Monoprice has made a name for themselves in the 3D printing world by finding their own niche within the industry. They often reproduce open-source systems and sell them for a fraction of the cost of the real 3D printer. With the low price though, you often still get top-notch quality, at least for some of their models.

Monoprice Maker Architect is a “workhorse” for a fraction of the cost. We put workhorse in quotes as this model has been the middle of a lot of controversies. Some users report amazing reviews of an awesome machine for dirt cheap, while others report a machine that barely stands on its own. It had all the promise of being a break-through.

Unfortunately, cutting costs in this situation did not work out. One of the biggest sells of the Maker architect is it is modeled after the Flash Forge Pro and MakerBot Replicator, which each run well over $1,500. You could find the Maker Architect for about $300. Of course, this is a budget 3D printer, so it does have its limitations. It does not have a heated bed, nor is there an auto-leveling feature. You can upgrade it, but Monoprice no longer supports this machine, so you are on your own with this. But, if you can get past the limitations, this is a decent 3D printer for very few dollars. Here are the key specs of the Monoprice Maker Architect 3D printer:

Some of the “nice to have things” on the Monoprice Maker Architect:

Some of “not so nice to have things” with the Monoprice Maker Architect: Final Take: A controversial 3D Printer that is Best Left in the Past

When Monoprice supported the Maker Architect, it was a great 3D printer. It is a duplicate of one of the best workhorse 3D printers we have ever seen. It was very similar to its popular open-source, still manufactured, models it is based off. With many similar parts and components, the Monoprice machine ran almost identical to its counterparts. As well Monoprice is known for making high quality, budget-friendly 3D printers. But there is a reason the company decided to stop supporting the Maker Architect.

There have been too many issues surrounding this 3D printer to advise anyone to pursue it. From miss-marketing of an upgradeable machine to failing parts, it is not worth the headaches. There are a lot of other duplicates that perform just as well and even better than the Maker Architect, and their respective companies still support them. Don’t let this one scare you from Monoprice. They are still a great and reliable 3D printer company and offer many other great machines. 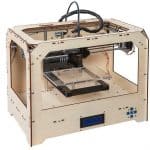