3D Systems Cube 3 3D Printer Review: Is It Worth It?

The Cube 3 3D Printer by 3D systems is a mid-range printer that promises to deliver smooth and high-quality 3D prints at a budget while being easy to use. One of its big surprises though is the fact that it has two extruders that can either print the same material and create prints in two colors or even print using two different materials at once.

The printer also has a very futuristic and minimalistic design that is great for beginners and people who just want to start 3D printing.

It is not very common to see 3D printers that have two extruders as well as all the bells and whistles such as wireless connectivity at such a low price point. 3D Systems also uses proprietary hardware for their printers which is probably the reason that they can reassure that their system can work as intended.

In the following sections we will list the core features of the 3D Systems Cube 3 as well as the Pros and Cons. At the very end, you will find the final summary of this 3D printer with an overall rating. Dual Extrusions: This had to be on top of the list. This small and relatively cheap 3D printer is capable of printing using 2 different materials at the same time, a feature that is usually found in a high-end 3D printer that cost two or three times as much as Cube 3.

This is achieved by using proprietary hardware and filament cartridges that combine the print head with the actual material spool. This is sort of the same system that is used for normal paper printers, where the ink is the actual print head.

Design: It is not every day that a 3D printer looks so futuristic. It looks like a magic machine, with zero sharp edges, no cables or components flying around and a very stylistic and minimal design gives this printer a very cool look. The filaments are placed on the sides of the printer and fit flush with the whole body of the printer.

ABS and PLA: Another great addition to this printer. While most budget 3D printers are limited to PLA because it is relatively easy to print, the Cube 3 is able to print in both ABS and PLA. And the best part is that it can do that at the same time thanks to its dual extruders.

Automation: The printer works for the user. There is no need for any calibration or tweaking with the settings. The 3D printer will automatically calibrate the print head and the print bed, requiring zero user input to the whole process.

Moreover, it will also automatically choose the best settings before starting a print job. Basically, the printer does everything on its own, with the only user input being the actual file to be printed.

Price: At just $260.00 (For the latest prices and discounts, check here), you get a very good and high performing 3D printer for most basic work. There is not much more you can get at such a price point that feature great looks and great features, including a dual extrusion setup with no additional hardware required. Dual Extruders: This is a feature that will never stop to amaze me. The fact that such a low end, budget printer has the abilities of high end printers for a fraction of the cost is mind puzzling.

And while the system 3D Systems decided to use does add to the total cost of their filaments, as they do ship with the print head attached to it, it should be noted that such a design ensure that the user will never have to touch the actual filament, ever. It is a true plug and play implementation.

Looks: It is not often that a 3D printer looks like an art piece. This is the case of the Cube 3 though. The design is very simple yet very well thought out as it incorporates a clean flat design while being practical. The side panels house the filaments inside a translucent door, allowing the user to see if the filament is running out.

There also no visible mechanical parts of the printer. Every component is protected and hidden away from the users perspective, giving it an unreal clean look.

Touchscreen: It is always nice to have a visual representation of what a machine is doing. And the 2.5 Inch top-mounted touch screen does just that. It gives information to the user regarding the print file, the print job, and the print progress.

Cloud Software: Everything is using the cloud in some sort of shape or form these days. And 3D Systems did just that for their 3D printer. Having a cloud-connected 3D printer means that you can access and control the printer from anywhere and that you never need to install additional software to start printing, as everything is based on web applications.

This also means that using the same web interface, you can control the printer from a pc, a tablet or a phone. Pretty much anything that has access to a web browser. Propriatory filament: Having a proprietary filament design where the customer has to buy a specific material to use adds a lot then the overall cost of the printer in the long run. And the filaments for this 3D printer are not cheap either, as they do include the print head on them, making them fairly more expensive than standard ABS or PLA filaments.

This also means that there is no support for any other material for the printer other than the predefined ones.

Limited Software: Having a cloud-based slicer and printer management system might sound like a very good idea at first, but it is a nightmare for anyone who wants to play a bit with their printer. The proprietary software adds a lot of limitations to the end user, especially the advanced users as they have no choice but to use the provided software to generate the necessary code for the printer.

There is also no way to use another slicing software, and the amount of available advanced options are extremely limited.

Unheated Bed: While the print bed was not mentioned before, it is worth noting that it is not heated. This is not such a big problem for PLA materials, as that material is really good at sticking with just a glue stick. But the problem becomes bigger when you need to print using ABS.

ABS is very hard to get to stick to the platform without a heat bed, and it will almost always cause the edges to warp or even came off the bed after the first layers have cooled down. It is not really advanced to print using ABS on this 3D printer.

The 3D Systems Cube 3 is indeed a very capable little machine but it does have some small problems, which is something to be expected from such a budget-friendly printer with such rich feature list. Below are few alternatives to consider that offer similar features and are within the same budget category. This is a way cheaper 3D printer what does not have any of the big features of the Cube 3. What it does have though it a heated bed, and it is also open source. So if you want to tweak a little bit more with your printer, then the Select Mini might be a better choice for you This is another great 3D printer in the same low budget category. It has some more features and looks better than the Select Mini. But it is missing the dual extruder of the Cube 3

The 3D Systems Cube 3 3D printer is a very capable and easy to use machine. It offers great features for a very affordable price. This printer is more focused towards people that do not have much experience with 3D printing and just want to get started. It is a very good starter 3D printer but what it is not is a printer for the advanced user.

While you can set up some basic settings, most of the magic and the settings are done automatically for the user by the proprietary software. And it is also worth thinking about the price of the printer in the long term since it can only be used with proprietary filaments. 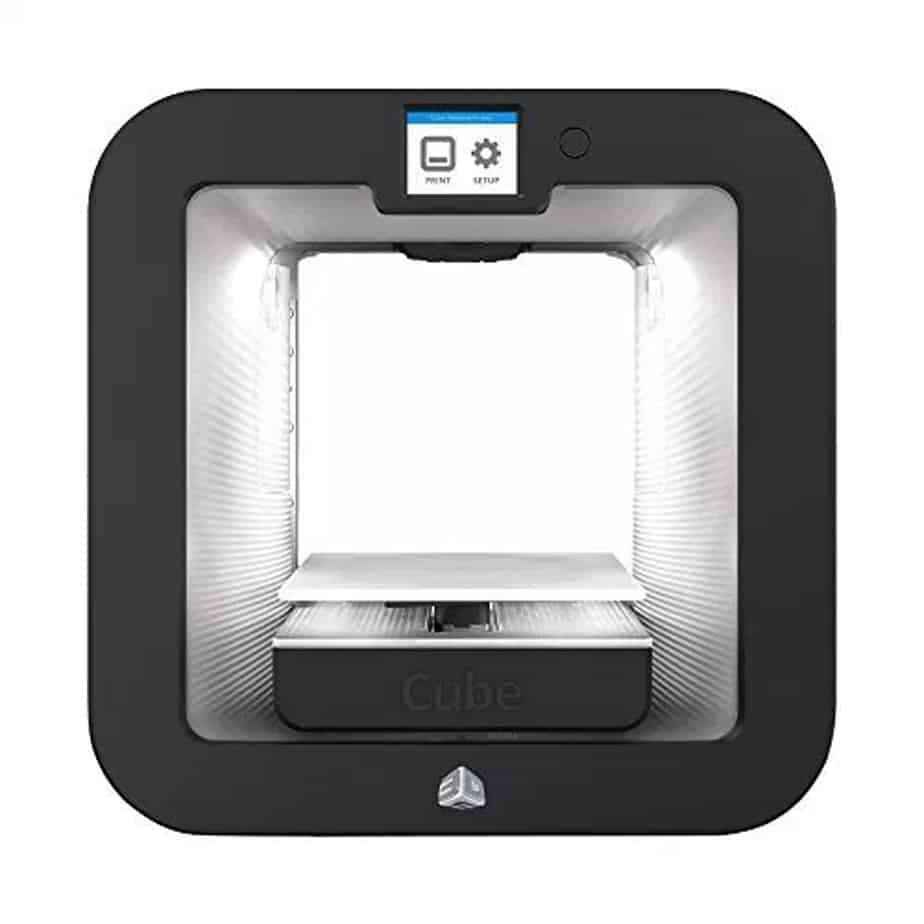