As early as 5-6 years ago it seemed like 3D printing was kind of a niche market. The advantages were obvious for small fabrication shops to create parts on an as-needed basis in minutes but otherwise 3D printing was marketed towards educational facilities or part-time tinkerers. As it turns out, that assessment was way off – as evidenced by the fact that 3D printers are being manufactured now as desktop models, lurching towards being almost as common in a home office as ink-jet laser printers and copiers.

So, who is the intended demographic for 3D printer manufacturers? The truth is, it could consist of just about everybody. After all, the limitations of 3D printing are consistently being broken down whether it be by adding more and more material types and capabilities or making it easier for those without 3D cad experience to create models with more user-friendly software.

One such device that is being marketed towards the home 3D printer crowd is the Orion Delta Desktop 3D Printer. For those familiar with 3D printing, the Orion Delta is a little different than industry norms as it features three different arms fixed on three towers circling the print stage.

The arms move up and down to create the object whereas more traditional printers move in an X-Y-Z access with a single (or double) printer nozzle. This layout is interesting but it also dictates itself more for just small scale projects – which a desktop printer is usually for anyways.

About the Orion Delta

Delta is the term that describes how the printer creates objects in the vertical manner instead of the traditional X/Y/Z layout of many 3D printers. Because of this, the creation of the Orion Delta is cylindrical in manner, reaching four feet tall and spanning two feet wide. The three arms slide up and down platforms which are secured to the printer frame. 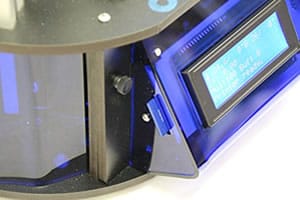 The arms are powered by motors in the base which move them left/right, up/down, and front/back. Although the Delta design and desktop 3D printers in general limit the project size, the Orion Delta measures in at a larger than expected 4-6” X 9” build height.

Something to know about most desktop / smaller job printers is that they use the fused deposit modeling printing method. What this means is that although the three printer heads of the Orion Delta move up and down instead of X-Y-Z, they still create the model in layers from the bottom up. The filament is the building block of any 3D printed object and it is fed from a spool, heated into a semi-liquid state, printed or “formed”, then cooled.

About the Company: SeeMeCNC

The Orion Delta is manufactured by a company called SeeMeCNC. The company was traditionally known for selling kits so that home users could build their own 3D printers but the Orion Delta is one of two factory assembled printers that the company offers (the other being the Rostock MAX). Consumers can expect to pay around $600 more for the labor and shipping required to have their 3D printer delivered fully assembled or as a kit.

For some, they learn more about how the printer works by building it themselves but others prefer learning the intricacies of printing itself with a fully assembled unit. One of the benefits about buying from SeeMeCNC is that they also sell a wide variety of filaments in exotic colors such as purple, gold, red, green, black, clear, and more.

The Orion Delta Out of the Box
The target demographic for desktop 3D printers has a very wide range from first time curious explorers to seasoned three dimensional vets. There are definite beginner 3D printers which are considered ‘plug and play’ so consumers can focus on learning 3d printing although the features are limited. Then again there are advanced models where the consumer does most of the assembly and programming. The Orion Delta falls somewhere in the middle of that spectrum.

No tools are required in the assembly of the Orion Delta but consumers will have to unpack materials and follow a guided manual to plug the correct cables into the corresponding ports. Once the unit is almost set to run the up and down (Z axis) then needs to be set to the correct height.

The print head should hover just above the print bed and this is calibrated with a small piece of paper to set the gap and adjusting screws on the arm. In future releases of the Orion Delta this will likely be done automatically with sensors but altogether out of the box to test print is about a 30-45 minute process.

One thing that 3D printers experienced or novice will enjoy is the ease of operation of the Orion Delta. There is an LCD control panel which is a huge addition to any 3D printer, but especially a home desktop one. This allows the unit to be operated either as a standalone or in the ‘traditional’ manner from a PC. 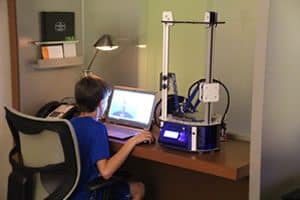 The LCD display is very self-explanatory. There is an LCD, a control dial, and a function button that allows cycling through the printing options and settings almost like setting a wristwatch. Of course it takes time to get comfortable with these functions, especially because the LCD screen doesn’t really display a status, more just options. An indicator light on the print bed dictates the status of the printer whether it be ‘off’, ‘preheat’, or ‘ready.’

Another feature that makes the Orion Delta user-friendly, especially to new users, is an automatic stop button. If something is going wrong with the print simply hit the button under the control panel to seize operation and have the printer head return back to home. Believe it or not many models require the user to cycle through multiple screens of controls to stop the printing process.

Those familiar with 3D Printing will no that there are multiple software programs available to control the process, mainly the turning of a 3D model into numbers and code that the printer can read. These users will also know that some programs work better than others on specific 3D printer models and in the case of the Delta Orion the software of choice is something called MatterControl. This program is not only very user-friendly, it also communicates especially well with the Delta Orion, providing better views of the individual print layers and assessing potential problems much better.

MatterControl can also be used as a scheduling software to order up multiple print jobs – great for production runs of high volume parts. 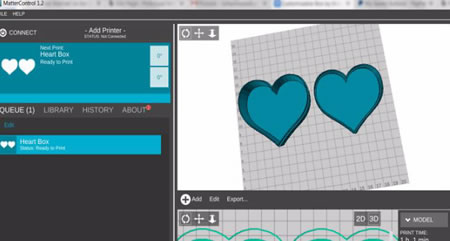 The Printing Process Itself

In the sport of golf there’s a term, “drive for show but putt for dough” which means you can get the ball to the hole as fancy as you want but it doesn’t mean anything until you put it in the hole. In many cases this analogy applies to the 3D printing world as well. Take Orion Delta for instance, so far we’ve learned that the machine is easy to set up, comfortable for users of all skill levels, and features software that makes the process even more efficient – but all these benefits are for naught if the unit can’t hold it’s own in the print process.

Before starting printing the user is faced with a number of questions that will (hopefully) optimize their process, some of which include:

While these questions may seem like a nuisance, they are actually designed as a final edit to save both valuable time and avoid wasting filament.

Speaking of time, one thing users shouldn’t be optimistic of before starting is using a 3D printer like a computer printer. If desktop PC printers are considered laser jet then 3D printers are laser Cessna. Not only will it take the printer bed about 15-20 minutes or more to heat up to the recommended 90° to 100°, the actual printing of something like a 5” statue can take anywhere between 6 hours and 17 depending on whether using the coarse or fine preset.

It should also be noted that the Orion Delta is significantly loud when printing.

With the open design and the three simultaneously moving heads it’s hard not to be. Another misconception with this ‘desktop’ printer is that it can sit out in the open like a computer printer but the truth is the bed is very hot and moveable parts pose significant safety risks, especially with curious children present.

Print Quality
The hard thing about recommending a 3D printer for somebody is the sheer variety of possible intended uses. Users themselves also wants some versatility whether that be printing a straightforward picture frame or an intricate necklace piece. Every 3D printer is going to perform better on smooth curves than it is on sharp details and the Orion Delta is no different.

Larger models with smoother surfaces are going to have better quality than small, detailed pieces so the consumer just needs to evaluate what they want the printer to do. To be honest, the Orion Delta does have visible layering on the coarse and standard presets and there will be some finishing work required – unless everything is printed in the ‘fine’ settings.

Other Features and Summary
All in all, for starting off at $1,049 the Orion Delta does represent a significant investment but at the same time gives users some versatility. Some of the features that help in the printing process include: 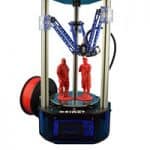