Both companies are based out of China. Tevo has been around since 2015, but Creality is a little newer as the company was founded in 2017. They are both on a mission to create the best affordable 3D printers.

However, as we have learned in the past with inexpensive kit 3D printers, you get what you pay for. We are going to take a look at two of the companies most popular 3D Printer models, the Tevo Tornado and the Creality CR-10. These two models seem to give you a little more than what you pay for in terms of size, and performance.

The Tornado and CR-10 both are based on the very popular open source Prusa i3 design. With the simple, but towering, all-metal frame designs these machines go up quickly and are sturdy enough to last a long time.

The pricing with the Tornado and CR-10 fluctuates quite often as most 3D printers from Tevo and Creality often do. In most cases, you will find the Tevo Tornado is around $50 cheaper than the CR-10.

Both models come in multiple variations in terms of size. We are going to be comparing the standard 300 x 300 x 400mm variations. The main difference between each variation is the size, so most of what you find below will apply to all models.

Now let’s dive and find out what the Tevo Tornado and Creality CR-10 are all about. 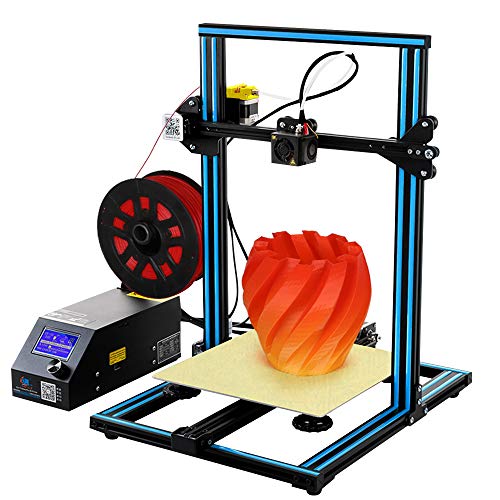 Initial Overview of the Printers:

While Tevo may be the older company, the Tornado 3D printer is actually the newer of the models. The Creality CR-10 is more of the benchmark for the industry in terms of large scale Prusa replicas. But Tevo took their time, waited for feedback or other models before releasing the Tornado. They listened to the customers to understand some of their dissatisfactions and improve on them.

With the Tevo Tornado, you get the all aluminum build in a bright green and black color scheme. The control box is separate from the printer itself but connects to the printer with three bundled cords. Unfortunately, the wiring and cables are rather short, and that limits how you can set up the machine. The front of the box features a small knob controlled LCD which you use to operate the entire machine. It does have a full-sized SD card, so you don’t need an adapter for any micro SD cards

A great minor detail you will find inside the control box of the Tevo Tornado is the removable stepper drivers. They have a bit of a plug and play style that allows users to easily remove and replace any broken drivers or even replace them for better ones. Where most 3D printers do not have removable motors, this is a great little feature to keep your 3D printer running longer.

Some of the most exciting features of the Tevo Tornado is the E3D Titan extruder replica and the silicone and ceramic heated print bed. A top of the line extruder combined with an even heating and powerful print bed means the Tornado can print with a lot of different filaments. The Tornado ships as a single extruder setup but can convert to a dual extruder system. Quick and easy setup instructions are available online.

As well the Tevo Tornado has fairly low operating noise thanks to the fan only running when necessary rather than running throughout the whole printing process. Especially given that it is an open design 3D printer, this is a nice to have when working in enclosed or smaller work areas while running the printer nearby.

Creality exploded onto the scene when they released the CR-10. The industry had not seen such a large 3D printer for so cheap, and the industry reacted quickly. Enthusiasts bought in right away resulting in a massive online following from all around the world. It is often held as the standard for it is size and design and is often compared to new 3D printers as they must meet the CR-10 even to capture a small chunk of the market.

As we have mentioned, the Tevo Tornado is based off the Creality CR-10, which is based off the Prusa i3. So, you are getting a very similar design with the minimalistic all aluminum construction and a control box separate from the 3D printer. The control box features a very similar knob controlled LCD display to operate the machine. But unlike the Tornado, the CR-10 has a spool holder built onto the control box. Although you could easily print one of these, it is a nice touch to have it as part of the machine right from the get-go.


The control box on the CR-10 has a cleaner, more professional look and finish to it than the Tornado. It has a solid metal front without any holes. The cables and wires are wrapped with a much cleaner appearance going from the back of the control box all the way to the back of the printer. And the cables are longer than on the Tornado, which gives you a little extra flexibility in how you place your 3D printer.

The CR-10 does operate with more noise although Creality is combating that with quieter fans in new models. This is a bit nit-picky as all 3D printers run with some noise. It may be minimal amounts in differences of decibel level, but some of you may be really bothered by this, so it is worth noting.

As well, it does not meet the same performance on the heated build plate as the Tevo Tornado nor the performance of the extruder. Where Tevo replicated one of the best, Creality settled for a non-geared extruder which you will see on most Creality 3D printers. The CR-10 still prints very well with this extruder, so this should not be a deciding factor between the two.

The Tornado uses a large silicone mat below a ceramic plate. The silicone mat takes in 110v of power, which results in heating very quickly and reaching higher temperatures. It easily heats the entire plate too. On top of the ceramic plate is a buildtak-esque material that works very well with all filaments. You get very minimal movement from prints during the printing process. The ceramic plate is also extremely flat and smooth and very lightweight.

With the CR-10, you get a two-piece print bed, which is glass on top of an aluminum plate. this makes it slightly heavier than the Tornado. Creality is known for warped glass beds. You may hit the lottery and get a very flat one but don’t be surprised if there is a slight warp.

Of course, these are replaceable, but you are paying for a flat printing surface, and you may not get that with a CR-10. As well there is not an adhesive layer on the bed so you will need to purchase or hack together your own.

The biggest difference is the power supply where the CR-10 uses a lower voltage of 12v to 110V of Tevo. This makes the bed take much longer to heat up to printing temperature. Many users will complain they can’t get the bed to ever break 100°C without making an enclosure for the printer.

Creality does have a much better design for adjusting the build plate. While neither is equipped with auto-leveling, the CR-10 is much easier to adjust. The nuts and bolts and a bit easier to reach and the bolt is pushed into the build plate on the CR-10.

Because of this, you are able to twist the nut below without the bolt spinning and the need for a second tool. On the Tornado, however, the bolt is not built into place and tends to spin as you try to rotate the nuts. You will typically need a tool to hold the bolt in place while leveling the bed on the Tevo Tornado.

Packaging: What’s Included with the Printer:

Final Verdict: Which is Better?

Creality may have set the stage for large format Prusa 3D printers, but Tevo certainly benefited from waiting before releasing their own version. Both 3D printers are extremely similar, and most differences come down to being a little nit-picky.

The Tevo Tornado is a bit more user-friendly with a larger menu on the control box, easier and more detailed instructions, and quieter operating noise. But the Creality is the better looking of the two with a much larger community and following online. The biggest difference is the build plate and heating elements as we detailed above.

The choice ultimately comes down to personal preference between the two. If you are going for the more popular, better-looking printer, then the Creality CR-10 is a great option. Have if you want slightly better performance, slightly better components, and a more user-based design then the Tevo Tornado is the right one for you. No matter which one you decide to use you will surely be happy with your decision once you have the 3D printer put together and running.