Anycubic 4Max Pro Review: Is It Right For You?

Anyone working with 3D printers or who is interested in 3D printing has probably heard of Anycubic 3D Printers. The Chinese company is known for giving hobbyists the best value for their money with 3D printers with a long list of features, some of the newest technologies, and a price tag that everyone would love.

The company came out with Anycubic 4Max Pro, which helped them cater to the younger set, the beginners, and the education market. This 3D printer wowed the market because of the following characteristics:

Should you buy the Anycubic 4Max Pro? Grab a chair and continue reading as we tell you everything about this 3D printer and help you decide if it’s for you.

Anycubic 4Max Pro: What You Need to Know

Anycubic has been coming out with some of the best yet affordable 3D printers of late. One of the printers that fall under this category is the Anycubic 4Max Pro.

You have probably heard about the manufacturer before because of their Anycubic Photon and the i3 Mega. The 4Max Pro is an improvement of the company’s original 4Max, which was released in 2018.

The 4Max Pro, however, has a different look from the original.

One of the first things you will notice about the Anycubic 4Max Pro is that it doesn’t look like the others. With a teal and black color scheme, it’s easy to tell it apart from other similar 3D printers.

The manufacturer also made the Anycubic 4Max Pro more intuitive and safer to use than the original 4Max. The full enclosure ensures that you don’t get in contact with the moving or the hot parts.

This 3D printer has a 3.5-inch (88.9 millimeters) touch display. And this touch screen is easily accessible.

The 4Max Pro uses the Anycubic Ultrabase bed. This heated bed has small holes in the coating, which gives it more adhesion — no more failed prints because your model toppled over. What’s more, finished objects are easily removed.

Printing speeds are rated at around 0.79 to 3.14 inches (20 to 80 millimeters) per second. The extruder can get as hot as 500 degrees Fahrenheit (260 degrees Celsius). That means that this printer can handle a wide variety of filaments, including:

The printer also has an auto-shutdown feature that turns the machine off when your printing job is done. It will further inform you when it’s time to swap out the filament when it runs out.

Who Should Buy the Anycubic 4Max Pro?

Beginners and hobbyists looking for a capable yet affordable 3D printer would do well with the Anycubic 4Max Pro. This fused deposition modeling printer is also superb for educational purposes.

This entry-level 3D printer is a good fit for those who are looking for affordable and eye-catching devices.

The Technical Specifications at a Glance

What You Will Love about the Anycubic 4Max Pro

Perhaps the most obvious things you’d love about this 3D printer are its low price and capabilities. With a sizable print area, you will find it challenging to find another printer in its price range that can match the Anycubic 4Max Pro.

This 3D printer is also a good fit for looking for a 3D printer that isn’t an all-black affair or plasticky looking. The teal body with black frames makes this 3D printer not only different in its looks but stylishly chic as well. That’s something that you don’t hear about 3D printers, which are mainly described as drab and utilitarian.

You will also appreciate the large and responsive touch display. This one is easy to use, and the menus are intuitive. It’s also easily accessible because of its location at the top of the 3D printer, rather than hidden away at the bottom like what you see on most other printers.

This 3D printer works quietly, and its enclosure keeps the noise levels down even more. Speaking of the enclosure, it also keeps the noxious odors of the melted filaments in, while keeping the prying hands of kids out of the printer.

Before You Buy: The Downsides of Anycubic 4Max Pro

The Anycubic 4Max Pro comes to you almost completely assembled, but you will still need to fit some of the pieces in before you can use it for the first time.

It’s a set of simple tasks, however. You only have to put in the filament sensor and the spool holder, and then proceed to level the printing bed and then insert the SD card.

At its price, it’s not surprising that the Anycubic 4Max Pro lacks some of the features that we’ve come to expect from today’s 3D printers, such as automatic bed leveling and Wi-Fi connectivity. These and other similar features make using a 3D printer a whole lot more pleasant. As such, using the 4Max Pro might be a bit more cumbersome than other machines.

The biggest draw of the Anycubic 4Max Pro is that it’s an affordable 3D printer with many capabilities for its price. The somewhat stylish printer is easy to use, making it perfect for beginners. However, the manufacturer has discontinued it, and you might not easily find it sold by different retailers.

So what are the alternatives? You can check out:

The Chinese company gives you another option: the newer Anycubic 4Max Pro 2.0. How is it any different from the 4Max Pro?

First, the printer is no longer colorful with its all-black exterior. It also sports a dual gear extrusion, and the direct drive helps it be more precise and less prone to slippage.

If you’re trying to break away from Anycubic, another Chinese-made printer might catch your fancy: Qidi Tech X-Pro. This may cost a bit more money than the original Anycubic 4Max Pro, but it is still a low-priced dual extrusion 3D printer that works more than just fine.

The Qidi Tech X-Pro also has a full enclosure that keeps the temperatures constant for better prints while keeping the odors from permeating throughout your room.

This 3D printer uses an aluminum heated bed that partners with a magnetic build plate to keep your models in place.

However, it does have a smaller build volume at 9.05 by 5.9 by 5.9 inches (230 by 150 by 150 millimeters). Also, the manufacturer has its own slicing software: Qidi Print, which means you will not be able to use any other software that you’re more used to.

The good news is that Qidi Print is easy to use and allows you to customize your prints. So if you’re new to 3D printing, you can use this slicer program and learn it in an instant.

Another 3D printer that’s worth mentioning and also has a full enclosure is the Monoprice MP Voxel. This 3D printer has a long list of usability features that you will want to know. 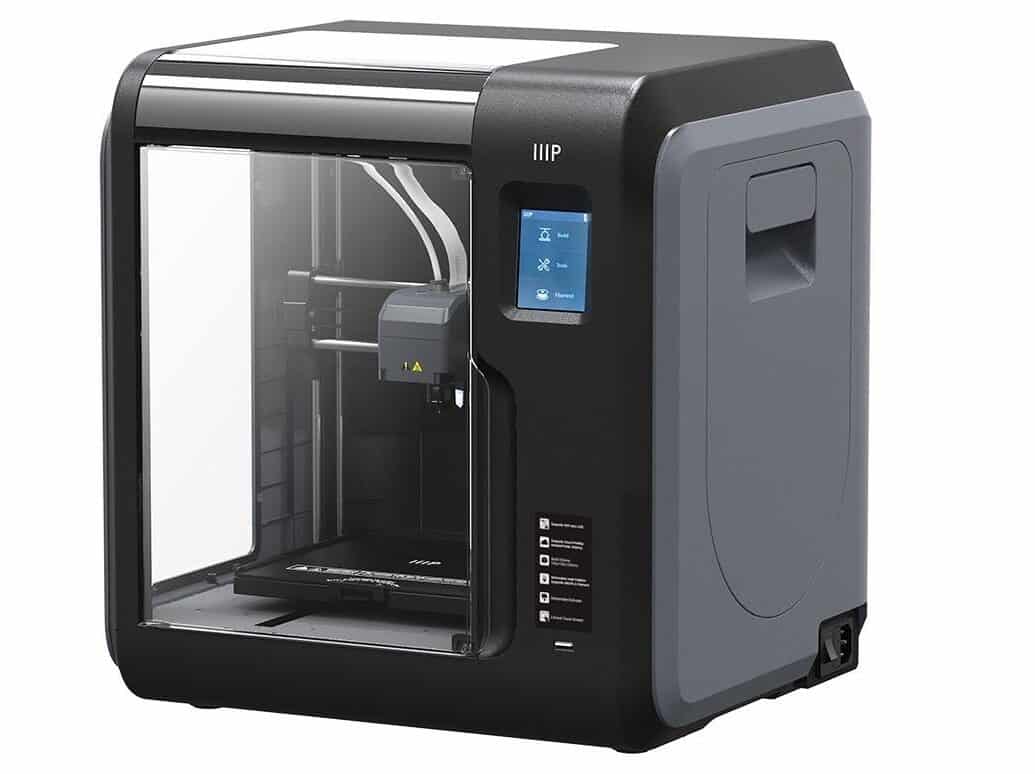 First off, you don’t have to spend a lot on this printer. It costs less than $400. For that money, you will get a cube printer that has Wi-Fi, an intuitive touchscreen menu, and a smart-looking 3D printer you’d be proud to put on display.

The set-up is very quick. You can take this printer out of the box and be ready to print in no time. What’s more, it uses a flexible build plate that makes it easier for you to remove the finished models without using sharp tools to pry them off.

You set the printer’s settings using the touch display. Plus, you get to see everything as it happens.

The Monoprice MP Voxel has a transparent plastic covering three sides, so you get to keep an eye on your prints. And to help you do that, an array of LEDs shines a light on things. You can also rely on the embedded camera to see your model while it is being printed, even when you’re not at home via the Polar Cloud app.

However, the build volume for this printer is less than the other printers we have here: it can print objects of up to 5.9 by 5.9 inches (150 by 150 millimeters). You should also be aware that the printer uses non-standard G-code, which means you cannot use the slicing program you want.

However, the big picture is that this affordable machine delivers everything you would want in a 3D printer. It’s perfect for beginners and first-timers to get their feet wet with 3D printing without having to spend a lot of money.

For its price and capabilities, it is not difficult to recommend the Anycubic 4Max Pro. It’s just obvious that it’s one of the best 3D printers to come out from a company that’s known for launching great printers.

It’s a user-friendly printer that you can buy for kids so that they’d be interested in 3D printing and create their own models.

Here are our replies to the questions you asked! Keep on sending your comments and questions about 3D printing and 3D printers!

Question: What Is Extruder Temperature?

The rated temperature will tell you what types of filaments are compatible with your printer. Most of the filaments out there is thermoplastic, but they require different temperatures to properly melt.

Filaments need to be melted. You cannot do much with the stiff, brittle string-like filaments unless they are heated up and melted into the rubbery substance that can be pushed out of the 3D printer’s extruder.

To give you an idea, this table will list some of the most popular filament types and their ideal extruder temperature:

Question: Do you need a heated bed?

Answer: A heated bed is one of the many conveniences that suitable 3D printers give you. It helps your models stay in place so that it doesn’t fall over or rotate in place.

As such, you don’t have to worry too much about your prints failing. Like the extrusion temperature, different filaments will have different requirements for the temperature of the heated bed.

The good news is that PETG and PLA both don’t need heated beds. But other filaments do:

Should You Buy the Anycubic 4Max Pro?

There is no doubt that the Anycubic 4Max Pro is one excellent 3D printer, especially if you take into consideration just how affordable it is. However, this printer is rather old, and Anycubic has discontinued production.

As such, it may be a bit difficult to find a retailer that’s still selling this 3D printer. If you are willing to get an alternative, there are some tradeoffs.

These newer 3D printers might have more advanced technologies and more features, but they have smaller build volumes. As a whole, the Anycubic 4Max Pro has the right combination of price, build volume and a long list of features that make it an excellent printer for beginners.