Freecad vs Fusion 360: Which Should You Choose?

In this FreeCAD vs Fusion 360 comparison review, we’re going to explore the features of these two amazing computer-aided design software. There is a wide range of 3D modeling software available (previously covered here) and both FreeCAD and Fusion 360 are widely recognized as great tools for creating incredibly detailed designs for 3D printing.

So which software tool is better?

In this comparison, we will be exploring the main features of each software, the user interface, supported file types, and ease of use. We’ll be comparing the minimum system requirements of each and exploring the toolsets and extensions that you can use. In addition, we’ll be showing you some of the alternative software available to design the products that you want to 3D print.

Main Differences Between FreeCAD vs Fusion 360

The main differences between FreeCAD and Fusion 360 are:

These are both extremely high functioning software that can be used for complex designs, and many of the features are likely to be used only by those with a background in engineering, however, there is plenty to attract a hobby user, learner, or small business user too. So let’s get into the details and find out more about FreeCAD and Fusion 360.

FreeCAD is a 3D modeler used mostly for designing real-life objects of any size. It’s primarily aimed at those working in mechanical engineering and product design, and with its scriptable CAD, there are options for electrical or architectural design too.

FreeCAD was released in October 2002 by authors Jürgen Riegel, Werner Mayer, and Yorik van Havre who wanted to create open-source CAD software to work on all platforms.

One of the key things to know about FreeCAD is that, as an open-source project, it is completely free for all to use. Because it is open-source, you can also add functions to the software using Python programming.

So who uses FreeCAD? A poll on the FreeCAD forum suggests that most people (52%) using FreeCad are doing so for their hobbies – whether the hobby is Computer-aided design or they are making personal real objects. 36% of users said they used it for professional purposes, largely mechanical engineering design and FEM (finite element method) analysis.

Fusion 360 was designed by Autodesk, the creators of well known and respected AutoCAD, which has been around since the 1980s. In this development, the designers were given free scope to redesign CAD tools, aiming to create a futuristic CAD tool from scratch, thinking about all the things they felt a premium CAD tool should have going into the future.

Designed with educators and students in mind, it aims to help them prepare for the future of design. It is a combined, cloud-based 3D CAD, CAM, and CAE tool. In one platform you are able to conceptualize various versions of your design, combining multiple modeling elements. A variety of analysis methods mean that you can ensure the form, fit, and function of your products.

In addition, you can add electronic intelligence using the Schematic design, PCB layout, and routing capabilities embedded in Fusion 360. With managed user permissions, version control, and cloud storage you can easily manage your data and gain more control.

Fusion 360 allows great collaboration and teamwork in real-time. It’s very easy to then move into 3D printing to see how your prototype works. Within the system, you can test your design using digital simulations of real-world conditions. 2D manufacturing drawings or animations bring it to life for potential investors or customers.

View Promos & Discounts Learn More
We earn a commission if you click this link and make a purchase at no additional cost to you. 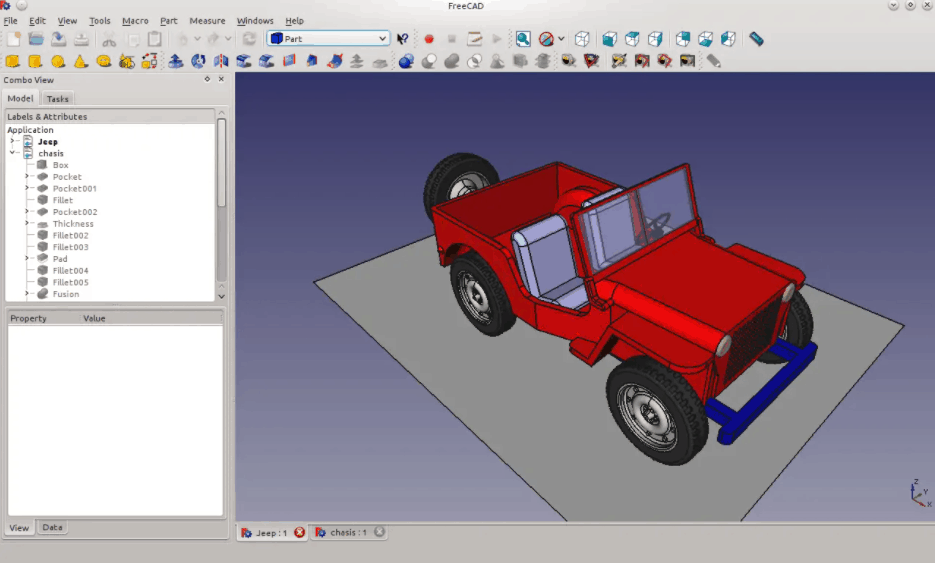 To help you decide which software would be a better fit for you, we need to look at how they compare in different features and functionality.

There are several key components of the new Fusion 360 interface, which was introduced in 2019 and has, to be honest, had mixed reviews. There are four key areas of this interface:

The User Interface on FreeCAD is based on Qt, a well known graphical user interface (GUI) used often in Linux but also available in Windows and macOS.

For the uninitiated, it can be a little clunky and over-complicated. It consists of the main view area (and 3D view); a panel containing the tree view and task panel, property editor, selection view, and report view; a Python console; a toolbar area and workbench selector.

FreeCAD mainly uses its own file format – FreeCAD Standard file format (.FCStd) – which is a standard zip file holding the files within a particular structure. Within this, Document.xml files have definitions of geometric and parametric objects, GuiDocument.xml has visual representations of these objects, and prep-files include items such as thumbnails of drawings.

Both of the software’s are quite complex with many different functions and it will take a little time to get the hang of all the things they can do. There are many tutorials available on the internet to support you learning different features not to mention the “Get Started in Fusion 360” in the Autodesk help area and the FreeCAD forum.

FreeCAD, in particular, has been described by many users as having a “steep learning curve” but nearly all said that once they had got the hang of it it was a user-friendly software.

FreeCAD has minimum system requirements of

Fusion 360 has a minimum requirement of

Both FreeCAD and Fusion 360 can be used to make detailed and precise drawings and models for your design.

In FreeCAD the functions are divided into workbenches. Each digital workbench has its own set of tools grouped by task So for example you may use one workbench for drawing a 2D shape and another for working further on them. There is a wide range of built-in workbenches, for example:

You can also easily program your own additional workbenches using Python, and there is a wide range of Addon Workbenches made by others in the community.

Fusion 360 has previously had two levels of function: Standard and Ultimate. Both already had a range of functions with tools for modeling, rendering, simulation, data management, and manufacturing all self-contained within the software.

They have now introduced Fusion 360 Extensions. This means that those with a Standard license looking for a different set of tools for their project, can purchase the appropriate extension bundle – for example, a Manufacturing Extension to give you tools for metal additive manufacturing – for a specified time period and these tools will immediately become available to you.

The Alternatives to FreeCAD and Fusion 360

Sketchup used to be known as Google Sketchup. It’s software for creating 3D models. It has a very user-friendly and intuitive interface allowing you to use push/pull toggles to make a flat surface into a three-dimensional object in your design. In addition, it has an extensive database of models other users have created that you can download and use for your own projects.

Sketchup comes with a wide range of pricing plans depending on what you want to use it for, from a free, web-based version through to a professional architect license. 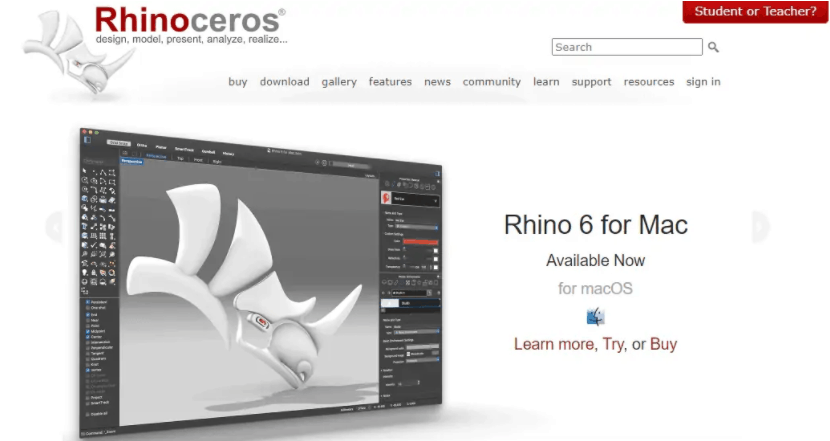 While Rhinoceros 3D is really a 3D modeling program rather than CAD, it’s probably one of the most versatile modeling software you can find for sale just now.

It has a wide range of design functions and can import a wide range of import files. The best thing about Rhinoceros 3D is that you are able to create such a wide range of shapes with incredible precision, from drawings and sketches and even a 3D scan.

Here are a few other CAD options that will help you with your 3D printing and that are available for free use.

For some other reviews and comparisons of CAD and other 3D printing software, you could look at our Solidworks vs. CATIA comparison, or check out our verdict on Fusion 360 vs. AutoCAD. We also have a great comparison of AutoCAD vs. Inventor or for another Fusion 360 comparison, we look at how it measures up against Onshape.

What is a Computer-aided design?

Computer-aided design – known as CAD for short – is the use of computers to help you design an object. The use of the computer makes it much easier to modify and improve a design, and with extra tools allowing for assessment and analysis and then the addition of 3D printing, you can go from design to prototype all from the screen of your home computer.
CAD helps to improve design quality, supports collaboration, and improves productivity.

How difficult is it to learn CAD for 3D printing?

Both FreeCAD and Fusion 360 are complex software that will require some practice and exploration to get to grips with.
The great thing is that there is a large community of designers on the internet who use both types of technology and not only are you able to find ready-made designs that you can use and customize, but you will also find countless tutorials to support you as you learn the systems.

Is it possible to import files from one type of software to the other?

While FreeCAD and Fusion 360 both have their own preferred file type, these are largely compatible and interchangeable and can also be imported and exported between a wide array of other modeling software. For example, you can import an AutoCAD drawing into Sketchup.

Absolutely. As open-source software, you can use, distribute, or modify the software for personal or commercial work. It really is free!

Can I save my design locally on FreeCAD or Fusion 360?

On Fusion 360 your designs are normally saved in the Cloud. To save them locally you need to click on the details of a design in your dashboard and then click Export and choose which format you would like to download it to your computer. In FreeCAD the files are saved locally.

The Final Word: FreeCAD vs. Fusion 360: Which One Is Better for 3D Printing?

FreeCAD is a great open source project and the contributors and builders are continuing to work on it and add to it with every generation. The fact that it is completely free and will certainly remain so is a huge advantage, and we know that it is only going to get better in the future.

It is flexible and the parametric modeling allows you to design based on existing models. A great feature is the model history, allowing you to make alterations and track your changes. It is great for geometric designs, but not so suitable for organic shapes such as figurines of plants or animals.

However, at this time we would recommend Fusion 360. It is a more complete product with a far more user-friendly interface. The free license for educators and students makes it accessible and if you are working commercially, you’ll find the price-points for the licenses are certainly manageable.

View Promos & Discounts Learn More
We earn a commission if you click this link and make a purchase at no additional cost to you.

Not only that, but it has an enormous functionality and has the capability to manage, create, and manipulate organic and natural shapes. There are a range of learning options and the extremely active Fusion 360 forum where you will always find somebody willing to give you support and advice.

We think that while FreeCAD is a super piece of software, and definitely a project to support and get involved with, from the point of view of 3D printing, Fusion 360 is the better product.

Jodie is a cross-functional 3D designer and blogger. She has special interests in open source 3D printing for R&D and has spent a lot of time at different projects across the globe to learn more about 3D printing. Most of what she has learned is from hands-on experience.