Skip to Content
Melanie Griffin
3D Printing Enthusiast at Total 3D Printing
Melanie Griffin is a freelance writer based in Columbia, SC. She writes about 3D printing, pet care, pop culture, and news that affects her neighborhood. She reads and writes fiction to stay sane and scratches her dog's tummy to stay happy.
Latest posts by Melanie Griffin (see all)

3D printer assembly kits are easy to screw up. They’re designed to keep their costs down, which means corners might be cut and details that you desperately need may be lost.

But once in a while, a company knows how to transcend the limitations of the genre, and delivers an excellent quality that you can build yourself.

And we’ve found two of them.

The Ender 3 and the Prusa i3 MK3 are both great choices if you’re looking for an affordable way to get into 3D printing and you’re not afraid to build some stuff to get there.

They both give you immense value for your money, they both have a fairly painless assembly process, and they both print 3D objects you can be proud of.

So which one is right for you?

Bottom Line Up Front: So if you want to see what the 3D printing fuss is all about, the Ender 3 is the perfect place to start. If you’re looking for a kit that ups the game and lets you try out a bunch of new features, the original Prusa i3 MK3S is worth its price here, if you’ve got the money. You really can’t go wrong either way.

Main Differences Between the Ender 3 vs Prusa i3 MK3

The main differences between teh Ender 3 and Prusa i3 MK3 are: 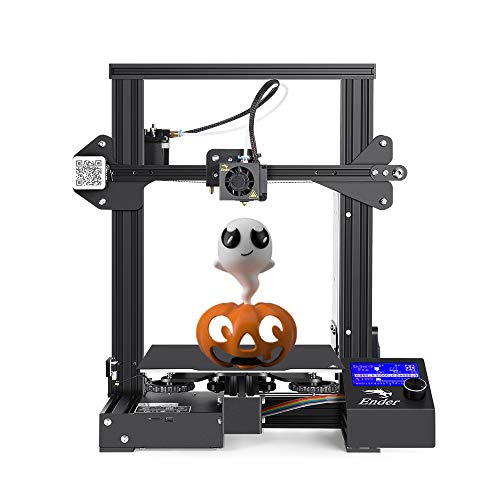 First up is Creality’s Ender 3, a desktop setup that is excellent for beginner users who don’t want to overstep their budget. Creality’s whole deal is making 3D printer kits accessible, and the China-based company has been improving on their models since their beginning in 2014.

Their Ender series is designed for the hobbyist user, but don’t let that make you think of bad quality – they’ve perfected the under $200 print until you can’t distinguish it from prints that came off rigs that cost two or three times as much.

Their Ender series is designed to get you involved in every step of the 3D printing process, from seeing how your machine is put together to watching the finished project materialize. Here are all the details you need to find out if Ender 3 is your best bet.

Pros of the Ender 3

The Ender 3 is one of the most affordable desktop 3D printers you will see out there, period.

You can find it for under $200 through all the vendors you associate with 3D printers, including Amazon, Gearbeast, and Creality itself. It’s not only affordable, but it’s also accessible, and you’ll have a lot of outlets to shop around to ensure you’re getting the best of the best deal.

You may still be wary after hearing the Ender 3 is a kit and not a fully assembled printer. So many 3D printers can pass themselves off as good deals because you’re doing all the work to get them going.

But with the Ender 3, the assembly process is virtually painless. This good start to your experience gives you a boost to enjoy the rest of your printing sooner and with more understanding of how things work.

Although the Ender 3 is by no means the largest – or smallest, if you’re into that – desktop 3D printer out there, its balance of print area and compactness makes it the golden ideal in its class. The printing size area is big enough for a large size range of personal projects, and you can always print pieces to assemble together into a larger finished object.

And for the Ender 3, compactness is translated into putting a lot of great stuff into a package that doesn’t waste space. Desktop printing is always going to be a cramped market, so Ender 3 gives you plenty of room to do your thing without getting in the way of the rest of your life.

It might take a little adjusting after your first few runs, but the Ender 3 gets what you want to do and helps that happen well. One of the ways it makes a great finished product is with its tight filament path – with fewer twists and turns for the filament to go through when it’s getting to the extruder, the smoother the print is going to be, especially when you’re working with flexible filaments like nylon.

The Ender 3’s upgrade system is the best we’ve seen in a kit printer. You’re not left alone to fumble with a system that’s going to be incompatible with everything else you want to use, and you’ll be able to take advantage of any (or all!) of Creality’s available updates.

Those are growing by the day, as are the creative additions Creality users post for others to find and freely use on the internet. If you’re one to tinker around with code and put together something awesome, you can add your own ideas to the mix and get them out there for everyone to use.

Cons of the Creality Ender 3

The Creality 3 is not perfect, and the most obvious way it shows its flaws is through its printer base. It doesn’t lie flat, which of course causes issues if you don’t correct it. The motion of the printing arm and extruder makes the base wobble unless you stick a corrective wedge under the uneven part.

Happily, the fix is just as easy as that. You don’t have to use any special piece of equipment or print any extension, you just have to make sure the base’s footing is evened out. But even if it is a snap to correct, you have to remember to do so to keep your prints from turning into disasters, and this also makes keeping the printer bed level difficult.

Related to your quest to even up the printer base is the need to manually calibrate your heater bed on a consistent basis.

This means to get the absolute best prints you can, you’ll have to manually calibrate it before every print you do. This is hands down the most annoying aspect of using the Ender 3 – but relatively speaking, it’s not such a terrible payoff for the amazing performance you get elsewhere in the printing process.

The first layer of any 3D print steers the direction of the rest of the print, either into perfection or disaster.

The Ender 3’s BuildTak-ish grip finish on its heater bed occasionally needs a little assistance towards greatness in this area; using an outside adhesion material is all you need, though, something like a permanent glue stick from Elmer’s. That’s all it takes to fix this little quirk, so whether you’re just starting out or a 3D printing veteran, you’ll be able to do it yourself no problem.

About the Prusa i3 MK3

As another top-of-the-line 3D printer kit, the Prusa i3 MK3 (and now the new MK3S version) is impressive for a 3D printer, period.

It boasts innovations that make it a contender beyond its perceived weight class, and its desktop status puts these in the hands of anyone who wants to experience it. It’s also something you have to put together, but it’s worth it. Trust us.

This is a great addition to any 3D printer, and the Prusa i3 MK3 doesn’t stint on the fancy extras that make your printing easier. However, this one can be fooled by a clear filament.

If you’re using any kind of filament without color, the filament detection system in here won’t see it, and unfortunately, this isn’t a quirk you can fix.

In my experience, it’s not enough of an issue to deter from the great aspects of this printer, but if you lean heavily on clear filament for your output, you’ll have to either find another printer or monitor this one very closely to make sure you don’t run out in the middle of your projects.

A few of the parts for the printer are 3D printed themselves, like the frame for the LCD control screen, and while the parts easy to add into the smooth build experience, they are not at the same visual quality of the non-3D printed parts.

There are surface discrepancies that, although few and far between and don’t interfere with functionality, are noticeable. If you know this will bug you, you can always print your own replacements.

Because this printer has so many components and features that are new to the field in general, the Prusa i3 MK3’s firmware will be updating constantly.

It will level out as these features become more widespread, but as anyone who is a frequent tech trailblazer knows, the kinks will have to work themselves out as they’re being used. You won’t be a beta tester, but you will be reaping the immediate benefits of those who were.

This is a really tough choice. Both the Creality and Prusa printers produce excellent quality 3D objects, and they both give you a wonderfully supported building experience. We highly recommend both of these kits for a 3D printing enthusiast.

We would say the real decision comes down to what design quirks you are willing to work with, but all of these have easy fixes, and the real difference is the price.

Bottom Line Summary: So if you want to see what the 3D printing fuss is all about, the Ender 3 is the perfect place to start. If you’re looking for a kit that ups the game and lets you try out a bunch of new features, the Prusa i3 MK3 is worth its price here, if you’ve got the money. You really can’t go wrong either way.

Why no specs for the Prusa? Actually, why so heavily leaning towards the Ender 3?

I don't think it's a legitimate unbiased comparison given that you've provided full info on only one of the printers.

I think you've the wrong prusa printer photos, the one published is an anet A8 clone with a wood frame not the real Original Prusa i3 mk3

It's funny that you would even think to compare these two and put the Ender on top. You obviously have some bias against Prusa because when you compared it to an ultimaker 4 times the price, you put the ultimaker above, even though it is arguably inferior due to its high price for what you get. The ender 3, while cheap, comes with many disadvantages, such as lack of customizability. There are few upgrades, but you will never see an ender printing with 5 filaments at once on a direct drive system. You also mentioned that the Prusa filament sensor is quite finicky, which I find interesting, because it relies on a steel ball to check whether the filament is loaded, making your argument invalid. Try doing your research next time. Prusa still comes out on top yet again!